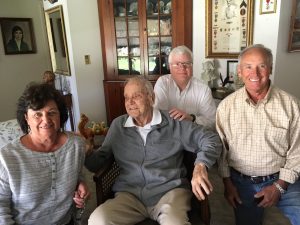 My organization was honored with the opportunity to serve Mr. Halada during his last year. He was a remarkable gentleman.

Mr. Halada was WWII combat veteran and POW who escaped from German captivity after 8 months imprisonment. He was awarded the Combat Infantry Badge, Bronze Star, and several other citations, including the French Legion of Honor. He was a father, loyal husband, very successful businessman, respected artist, 5 handicap golfer, and stock market junkie. He is survived by his son and daughter, four grandchildren and three great grandchildren.

He was an amazing conversationalist. I remember my first visit was scheduled for one hour but lasted almost three hours and could've gone longer. One of my most cherished memories will always be the visit I made to him with my grandpa, James P. Donegan, a fellow WWII combat vet. The visit turned into a two hour documentary unveiling in front of me. One fought in Europe and the other in the Pacific. Stories of Normandy, escaping a German POW camp, shooting down an enemy plane with a rifle, being confronted by General Patton himself, eye witness account of Iwo Jima and battle of Corregidor, shooting down kamikaze's and being hit by a torpedo center mass that ended up being a dud. The words didn't have to be said...it was clear there was a mutual respect of what each went through and the lives they built afterwards.

The match between a caregiver and client is a crucial part of the value-add service we provide. Mr. Halada was matched with Elaine and the connection was instant. Elaine served Mr. Halada almost every day for a year and was entrusted with just about everything. The compassion with which Elaine served was a perfect example of what Seniors Helping Seniors represents. I can't thank her enough for what she did for Mr. Halada. One of the many ways he showed his appreciation was by making the below painting for her. 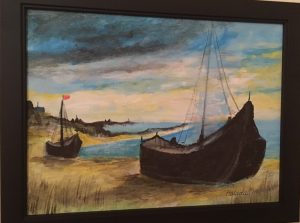 All of us, not just caregivers, have an opportunity to serve The Greatest Generation. Take the time to help, even if it is just sitting and listening to their experiences and wisdom.